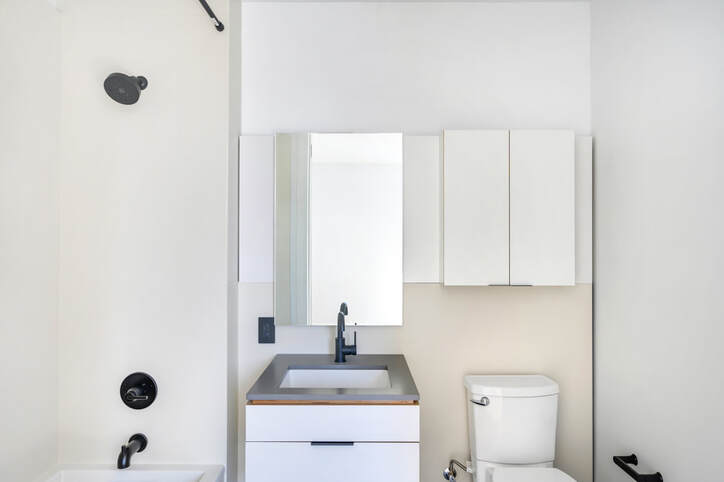 My role in regard to the SoCo Bathroom was to design the bath vanity, medicine cabinet, and mirror assembly.

Design Constraints:
There were two bathroom configurations, but they were essentially mirrored versions of each other. In order to reduce SKU count, the bathroom sink and medicine cabinet needed to be interchangeable. They also needed to be mounted to the wall quickly and easily without showing any visible fasteners. Since no lights were mounted in the ceiling they would have to be attached to the top of the mirror/medicine cabinet assembly, as well as behind the mirror. The controller that powered the LEDs needed to be hidden but accessible. The vanity/sink had to be free standing in order to accommodate ADA convertibility, which meant it had to be securely mounted to the wall. Since we had wall covers to house/hide the low voltage and water lines, long screws were used to penetrate wood blocking behind the wall cover and drywall.

Install Sequence
Finished Bathroom
Lessons Learned
The P-trap wasn't spec'd before the sink vanity was finalized. The assumption what that it would be similar to what we'd been using for prototyping. The waste pipe couldn't come out of the wall centered on the sink because there was a riser behind one half of the sink. Therefore, the waste pipe came out of the wall slightly off-centered, and the P-trap was supposed to be able to accommodate this. The waste pipe ended up being slightly further from center than expected, and the P-trap that we ended up needing to use had a slightly larger OD than what we originally thought we could use. This meant that the cutout in the drawers that would allow the P-trap to pass through was no longer big enough. All of the P-traps were interfering with the drawers by about 1/8 inch. This meant that 24 drawer bottoms had to be removed, sent back to the cabinet shop, and modified. Hindsight being 20/20, we should have fully locked down the part number for the P-trap, as well as given up some drawer space in order to have a larger tolerance.